There's a Nascar-themed McDonald's in Delray Beach and it's customized in a Nascar racing theme with Nascar memorabilia and Bill Elliott's Nascar #94 quietly parked on the dining room floor.

This McDonald's would be fantastic for a Nascar-themed McDonald's birthday party!

My friend, Steve R! has provided us with his very own personal experience of discovering this very cool Nascar McDonald's in Delray.

I am not much for fast food restaurants. Millions of people are.
I’m not for many reasons. So for the most part, you won’t find me in one for say lunch or dinner. The exception to the rule is breakfast.

I have a thing for breakfast and I have been known on more than a zillion occasions to eat breakfast for dinner. But I digress, back to breakfast at fast food restaurants.

I have a favorite, and in my opinion, fast food breakfast is best at McDonald’s.  I love nearly everything on McDonald’s breakfast menu. Give me an egg or sausage biscuit and I’m having a “happy meal.”

When I am having a particularly empty-stomached morning, give me the McDonald’s BIG breakfast with pancakes, eggs, hash browns and sausage. 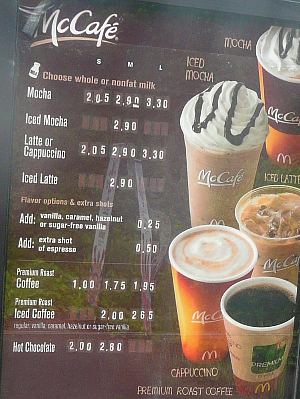 Also in my humble opinion, McDonald’s McCafé Latte (unflavored and sweetened with Splenda) is the best coffee I have ever had in any restaurant and for the $2.79 price per cup -- SCORE!

Yeah I know. I couldn’t believe it either at first. So don’t take my word for it, try it for yourself.

Note to my readers: In 2008, McDonald's decided to get serious about their coffee -- apparently to give Starbuck's a run for their money -- and indeed they did!  McDonald's now has McCafe's serving up a serious cup of coffee made with their very own 100% Arabica coffee beans.

And, even more, you can get a specialty coffee drink like an iced mocha, iced coffee, flavored latte's, cappuccinos. 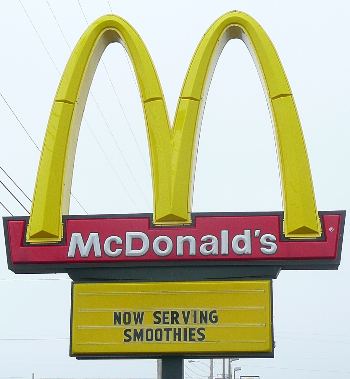 The fruit smoothies are made with real fruit, yogurt and ice. 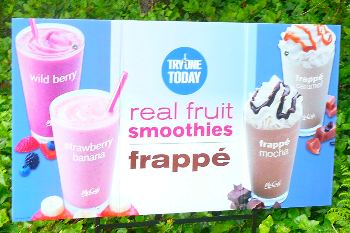 Sorry for interrupting Steve, but I just had to share with my readers these new great McCafe's that McDonald's has (thanks to you sharing this info with me ;) And McDonald's new smoothies too!

Nascar McDonald's in Florida
I-95 and Linton Blvd. in Delray Beach

For a truly unique experience, you have to visit the McDonald’s in Delray Beach at 1220 Linton Blvd. about a block east of I-95.

What makes this McDonald’s in Delray so special is the Nascar-themed décor.

I have been to specialty McDonald’s before, like the rock-n-roll location on 600 N Clark Street (between Ohio St & Ontario St) Chicago, IL. -- But this McDonald’s is truly different.

It’s like a “poor man’s” racing museum complete with a full-sized McDonald’s branded race car right in the middle of it. 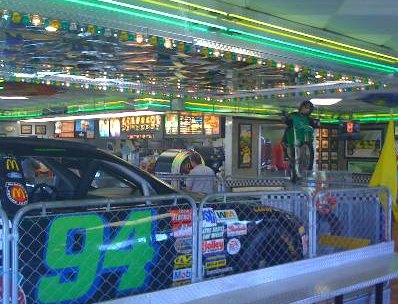 I discovered this McDonald’s like I discovered most of my finds -- quite by accident -- no pun intended. There is no outside signage alerting you to what sort of McD’s you are about to enter. I was just hungry and with time to kill, I decided not to use the drive-thru that day.

So when I went inside, what I found was... 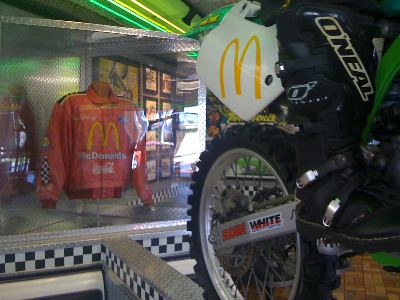 A race motorcycle; racer in full racing leathers; an auto hood with the “Golden Arches” imprinted on it mounted to the ceiling; various “winner’s trophy’s,” racing car miniatures and other toys in a display case; racing tires, car bumpers and assorted artwork on the wall; seating in the shape of bucket racing seats and so much more. 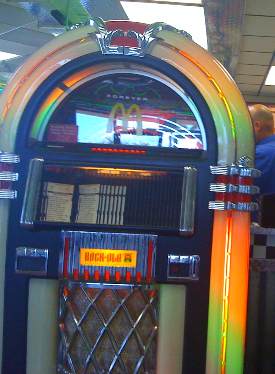 Another added bonus is the old-time juke box blasting out 50’s and 60’s rock and roll including The Beach Boys:

This is a place you will want to take your family even if you only go for a biscuit and chocolate milk or a McCafe coffee drink like I do.

What an awesome place to have a
kids birthday party! 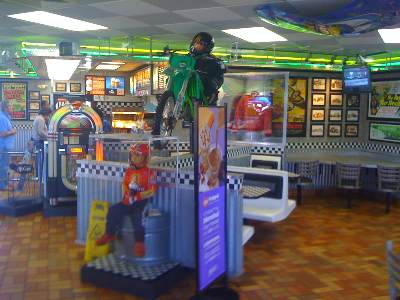 But there is more to my story...

On this particular day I had finished my crispy-on-the-outside egg & cheese biscuits and took my latte back to the car so I could finish it and talk on the cell at the same time.

As I sat in the car and talked, I had the window down to enjoy the cool and beautiful May weather in Florida on this particular morning. 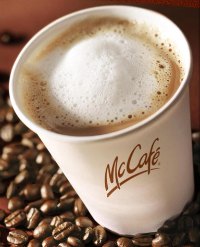 A young boy no more than 12 years old wandered by my window.

As he passed, in a very obvious Haitian accent, he said hello to me and kept on walking. I gave him the “I’m on the phone"
when he stopped, held out his palm which held about three dollars in assorted change in it.

He very politely asked if I had any spare change. I really didn’t as I gave the last of my exact change to the cashier for my breakfast.

“No, I really don’t,” I said. He thanked me anyway and proceeded directly to the back of the McDonald’s where I lost sight of him.

I looked down to get my McCafe latte out of the cup holder and when I looked up again, I saw a McDonald’s employee asking the young man to leave the dumpster area.

(I’m sure the employee was just following company policy.  As my editor pointed out, there could have been a potential liability issue should the young man been injured on property. So this is by no means meant as an indictment of the employee or McDonald’s.)

Nonetheless, my heart broke. He was actually looking through the dumpster for food.

I called the boy over and said, “You really are hungry aren’t you?” “Yes sir I am,” came the very polite response.

“Do you have any brothers or sisters,” I asked? “I have a brother,” the boy said. “Come with me. I am buying lunch today,” I replied.

For him, it was an eye-popping moment. He couldn’t believe it. So we went inside and got up to the counter where I told him
to order whatever he and his brother liked. I gave him no monetary limit just to see what he’d do.

The switch from breakfast to lunch had already occurred, so he ordered only two chicken sandwiches and two sodas. I paid the cashier with a $20 bill and directed that he give the change to the boy. Once again, his eyes popped out of his head. We exited the McDonald’s in silence, just instinctively knowing he was very appreciative.

Paying it Forward
I'm Lovin' It!

As we approached my car instead of saying g’bye, I chose to explain the concept of paying it forward and said this:

“someday, when you have a little more money in your pocket, I want you to remember me and what I did for you and your brother today because I want you to do the same for some other little boy, or homeless person or whoever looked like they could use a little help.”

He thanked me and agreed to my terms. We both went away happy. 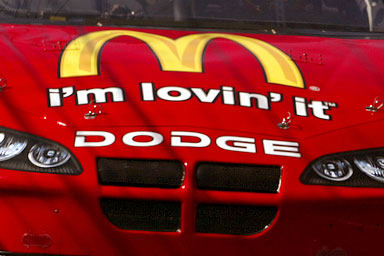 As per a recent Google search, there is one other specialty NASCAR McDonald’s in Florida, located on West Okeechobee Boulevard in West Palm Beach.

More “specialty” McDonald’s are on the drawing boards, so look for them soon on a South Florida street corner near you. And if you see a child in need, help him or her out.

You will feel great and you too will be “lovin it!”