The Flyers: Tony, Joe, Patrick (click on each image to enlarge) It’s Wednesday night in Delray Beach and we’re walking down The Avenue toward Johnnie Brown’s.

Blocks away, I feel a sudden rush when the sound of the Flyers begins to rock me.

Then Patrick’s amazingly lyrical, energetic and soulful stream of sound fills the night and completes the ensemble.

Our pace quickens as we approach and we eagerly submit ourselves to their wondrous energy. They light up our faces, soothe our souls, and make our cares slip away. 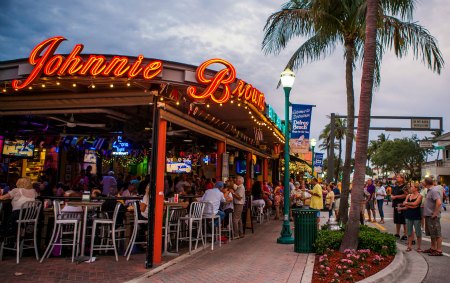 Our good fortune at finding such a high caliber band in Delray never ceases to amaze us.

Who would ever think that a seasoned, top-tier professional bassist, a truly gifted and growing lead guitarist, and a first-rate, versatile percussionist would show up here?

The special rapport between father and son and Joe creates a unified sound like no other.

Watching newcomers’ first reaction to the Flyers is always a kick. Just like us, they’re stunned, awed and delighted all at the same time.

Soon, they too are immersing themselves in the music, and bonding and sharing smiles with the crowd.

For several years, we watched the Flyers from the street, content to bask in the joy of their music. But that wasn’t good enough for the Flyers. They needed to bring us into their fold.

So one night two years ago, Tony and Patrick walked over to meet this somewhat curious and loyal trio of fans. They were quick to show their kindness, especially toward Adam (our son who has Autism) who they approached with openness, warmth and respect.

From that day, we could depend on Tony or Patrick flashing a welcoming smile as soon as they spotted us in the crowd.

During breaks and at other times, they would come over to say hello, share a bit of their lives, and see how we were doing.

Soon, we began to feel more like family or long-time friends, rather than just fans. That is indeed the secret to the Flyers. Their warm spirit fills their music and brings people together.

Comment by Danika Dahl: Ron - Thank you for your excellent write-up on Johnnie Brown's. This place is so deserving of it!

I added two more pictures at the top of the page. And at the bottom of the page, I added information on why it's called Johnnie Brown's -- and I had to post that they were recently voted "Best Night Spot" by Florida Monthly Magazine! ;-)

Frank Lloyd Wright said, "Many architects had imagination but only Addison Mizner had the courage to let it out of the cage."

That's not all he let out of the cage.

This was a debonair guy who was bigger than the stories told about him. At over 300 pounds, he was a larger-than-life eccentric who typically paraded about town carrying a small zoo on his shoulders. Johnnie Brown was the star -- a mischievous and fun-loving spider monkey -- would sit on one of Mizner's shoulders, often a parrot on the other. Folks knew they were somebody if Johnnie recognized them; he even ran for Mayor of Palm Beach. Johnnie reportedly enjoyed great food and good music. He passed away in 1927 and is buried in the courtyard of Mizner's villa off Worth Avenue where his headstone calls him "the human monkey".

So, in honor of the fun-loving spirit of this famous monkey, let your self out of your cage in this place we call Johnnie Brown's!

Leave a comment about the Flyers Rock Blues Band at Johnnie Brown's...